Even though we are on vacation, our Little Butterfly never truly gets a day off.

It was cool on the lake this morning and we had two very special butterflies to pick up in Erie so we headed into Perry Square and did just that. The two butterflies were part of the annual Wings of Hope Butterfly Release, a benefit to raise money for hospice. This is the second year we’ve picked up two butterflies in memory of Michael’s maternal grandmother, Mary Staebler. We took the butterflies to Michael’s mother’s house and released them just as we did last year. It was a beautiful thing.

Meanwhile, our Little Butterfly has things to do and Sensory issues to conquer. After she and her father spent a while in the hot tub, it was off to a department store to pick up a booster seat for Keti. For two nights in a row, Keti has not had a proper breakfast or dinner. We’ve supplemented her meals with pouches and Pediasure: totally not ideal.

This afternoon we scored a totally cool Elmo booster seat that we can travel with in the future. Around sunset, it was time to work. First we had to do some proprioceptive input, basically deep pressure joint compression and then some massage with lotion. Then it was up to the booster seat where the real work lay ahead. We had apple sauce and graham crackers tonight. She’s good on the apple sauce, it’s the graham crackers that freak her out. Her father crushed them up into the tiniest crumbles and put them on a plate for me. Miss Smarty Pants sees them on the plate and starts refusing the apple sauce. I sing to her and finally get her to take another bite and praise her as though she’d just won a Pulitzer Prize. I take the plate and dump half of the crumbs onto her little Elmo table and she immediately starts touching them. That’s a good thing! I dip the spoon into the apple sauce and then the bottom of the spoon in the graham cracker crumbs then say, “Take a bite!” She takes a bite. Half of it comes out. I still tell her, “Good bite.” I scoop up what came out and say, “Take a bite!” She takes a bite, swallows and I praise her again as though she just won the Pulitzer.

This is our life with a child who has Sensory Processing Disorder and Dyspraxia. There is nothing easy about feeding Keti. For the first 12 months of her life she was borderline Failure to Thrive, which is a very serious matter that could’ve necessitated a feeding tube. I’ve had friends and relatives tell me, “Well, if you just starved for a few days, she’d be hungry enough to eat whatever you put in front of her.” I wish it were that simple. I would’ve starved the kid out long ago if it had been. But she would starve before she would eat a graham cracker or a cheerio or rice pudding or a chicken nugget. The Dyspraxia inhibits her ability to process food and the Sensory Processing Disorder inhibits her ability to tolerate texture. It’s a wicked combination.

So, even when we’re on vacation, our Little Butterfly works. And we work with her and for her because she is so worth it. We are so very fortunate to have a new Occupational Therapist who is working with Keti on her feeding issues. She has been with her just over a month and already we’ve seen terrific strides. Here’s to many textured foods in her future!

Just a year ago, I felt paralyzed by what Ketevan couldn’t do and the nadir of my paralysis was August 2012.

We came to Erie as a family to spend time with family. And I must add that this family I’ve been blessed to become part of is the most loving and accepting family one could ever hope to have in any situation, but especially with a kiddo with Specialties.

Last August we rented a lake house on Lake Erie. My husband was so excited. He was born and raised in Erie, PA, but had never stayed at a lake house during the summer. There was a birthday party for all of the cousins planned and many gorgeous sunsets to unfold before our eyes. But amidst all of the wonder of summer, I felt as though I might not be able to get through a single moment of it. Inside I was a wreck. All I could think about was the stress of Keti’s limitations at the time.

A year ago, our Little Butterfly was 18 months old. She could not walk. She could not talk. We had to carry her everywhere. Her Sensory issues made her leery of things like grass and sand, so getting her to do anything out of doors was difficult. She had special dietary needs that had to be met which required a lot of planning ahead. We never knew what she could and could not tolerate from a Sensory perspective so it was a toss up – bring her to the cousins birthday party and pray that she can assimilate, and thank God she did. She actually loved getting into the hot tub with Daddy. I never would’ve believed it until I saw it with my own eyes.

Tonight we are back at the same lake house. On the drive across the Great State of Pennsylvania, Michael and I talked a lot about how much Keti has grown during the past year. And not just that she has grown so much, but that she worked. It took countless hours of Physical Therapy and a very determined little soul to get to where she is now: Ketevan is a 30-month-old child who can walk.

When I see the picture above that we took last year I wish that I could tell myself then, “She’s going to be OK. She’s going to walk 13 days after her second birthday. You won’t believe your eyes when you watch her spread her wings and fly.” I feel sorry for the mother who came to this lake house last year. She was a hot mess. She worried constantly. She obsessed over the big milestones that were all unknowns. She could never just be in the moment. She was always thinking ahead to when-is-Keti-going-to-walk-when-is-she-going-to-talk-what-will-other-people-think-of-her-eating-purees-at-18-months-how-do-I-make-it-seem-like-everything-is-ok? I want to go back in time and hug her and reassure her everything is going to be OK.

At 30 months, Ketevan can walk. She still cannot speak. She is babbling a lot, but no words. She is still on a special diet and is getting intensive Occupational Therapy to work on her aversions to textures in food. She loves walking in the grass and playing in the sand. She loves the water! When we took her down to the beach tonight, we watched her make the cognitive connection that Lake Erie was a big Splish Splash (our words for pool and bath)!

The unknown can be a terrible hardship for parents of children with Specialties. When a child has cognitive delays combined with a physical condition like Hypotonia (low muscle tone), it makes it very difficult to achieve those milestones which seemingly come so easily to typically developing children. Walking is achieved by a typically developing child anywhere from 9 to 15 months. It took Keti 24 and a half months to be able to cognitively and physically walk.

Our little Butterfly is metamorphosing at her own pace. That doesn’t mean I don’t worry about her because I do. All. The. Time. But it’s at a more reasonable level now than it was a year ago.

Tonight, we came as a family to the same lake house to spend time with family.  The cousins are here. The wonder of summer is in effect. We watched a majestic sunset, only this time, our Little Butterfly was standing on her own two feet and was tugging at her father’s hand, urging him toward the water and the golden horizon.

We’re on the road again! This time we’re headed to Erie, PA, with a pitstop in State College, PA, to see the caverns.

As we were driving through the majestic Appalachains, Stevie Wonder’s song, “Isn’t She Lovely?” Was playing on satellite radio. I turned my head around and looked at our little Butterfly sleeping in her car seat. She is the loveliest thing I’ve ever made. Really and truly.

When we got checked into the Nittany Lion Inn and freshened up, the three of us went for a walk when it hit me. We made this trip to Erie last year. Keti would have been 18 months old and she could NOT walk.

Oh, how much you have achieved this past year, my sweet Ketevan. You have such determination and such a happy soul. You make me so proud. And my darling, you are so, so lovely! 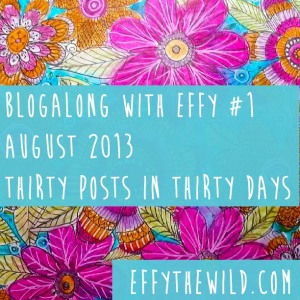 Day 1 of Blog Along With Effy
This Glittery girl has made me grow so much this summer, I could not resist this challenge and let’s be honest, the great intentions I had for this blog when I created it have fallen sorely short of what I anticipated.

So here we are.

The little Butterfly continues in her metamorphosis. She amazes me with her grace and giggles every day. She is not without her struggles, but she is always so very, very happy It almost makes me weep thinking of how her spirit shines no matter what she is faced with.

We are now living in Chester County, Pennsylvania! Our new home is our little dream house. Keti now has a yard to play in and her Daddy has a yard to mow. I am still unpacking. We got rid of ALL of our old bookcases. Looking back, that may not have been the best decision we made, considering we probably have about a thousand books. Yeah. So those are in our finished basement.

I can’t really get my head around the fact that my Butterfly is going to start preschool in six months! Actually, it is now five months and three weeks, but who’s counting?

Tomorrow we head off on holiday again. This time we are off to Erie, my husband’s hometown and the home in his heart. Butterfly is rocking out to The Wiggles on Amazon cloud and I am trying to figure out what art supplies I can bring with me to practice drawing girl faces.

All is well here. Thank you, Effy Wild! Smooches to you!

The fabulous Effy Wild is offering her 17-week workshop Book of Days beginning July 1. Sign up now and receive $20 off the cost of this remarkable workshop! Find Effy here: http://effywild.com/bod-2013-session-2/